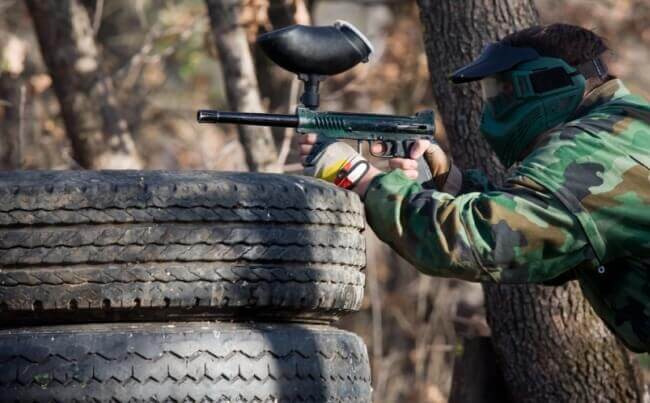 The Swansea paintball venue, situated in stunning South Wales scenery, is just 30 minutes from Swansea centre and has some of the best facilities in the South Wales. Players travel from all over Wales to play this great paintball site as it boasts some fantastic game zones which provide the perfect location for any paintball day. The venue is easily accessible from Swansea and proves to be an extremely popular choice for paintball players looking for a venue where individual skill and team-work are necessary in order to storm the enemy base and be triumphant. The game zones at Swansea Paintball Park are varied missions with a great mix of features. A fantastic site for stag/hen parties, birthdays or work outings the Swansea venue will not disappoint. The site uses the latest in semi-automatic paintball markers that give you the ability to unload your ammunition on the enemy and advance through the game areas. The Swansea park is a must for all players in South Wales whether you’re a first timer or a seasoned paintball pro and will leave you having had a great day full of fun and many laughs.

High velocity paintball!! Close encounters with the enemy are a certainty in this fast paced game zone. The zone is small, the barricades are low and the sound of paintball guns is deafening. Keep your wits about you and an eye on your team-mates as in this game or are going to be in the thick of the action whether you want to be or not!!

Set in the woodland are a series of barricades which are the only protection you have from the incoming enemy fire. Can you progress through the game zone picking off the enemy and taking their positions in order to gain advantage and reign victorious? You will need to use team-work and communication in this game in order to win, if you don't you will play right into the enemy's hands.

This huge structure rises from the ground in the dense woodland. It has been the scene of some epic paintball battles and not many have lived to tell the tale. Will you be the next one to escape the carnage and live to tell the tale of the fortress, history says you won't!! A real test of attack & defend, load up with paintballs because you're definately going to need them on this game.

At each end of the game zone is a tower, each team must defend their tower from enemy invasion. Whilst doing this you must also attack the opposing tower in order to raise the flag and win. This is a classic paintball game. Don't over commit in attacking or you'll leave your tower exposed, defend too hard and you'll never win.